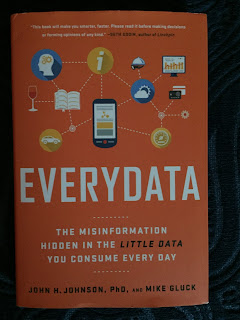 The other day my friend Christie invited me to a party because her husband wrote a book. I thought, "Yay, I love parties!" I did not think, "Oh, I should go read the book." Because Christie's husband is a PhD in econometrics. He is an expert in the use and interpretation of data and he wrote a book about just that...data.

So, yeah. Not very high on my reading list. Only then I started to feel guilty. There's no way Christie would know I was at her party for the cosmos and the conversations with no intention of reading the book but I'm such a rule follower that I just couldn't do it. I bought the book. I figured I'd skim through it enough to throw out a few strategically placed comments showing I was a book supporter and not just there for the free food.

I had no idea I would actually LOVE the book. I would never have predicted that reading about data would be so enjoyable, informative, and laugh out loud funny! I read it cover to cover last week, as my family can attest, because I kept talking about it at every family dinner. In every chapter, I made connections--to the examples, the stories, the information.  I think people are constantly trying to make sense of data--they want to draw conclusions that connect with their own individual stories.

As a teacher, I made connections from the book to my own career. In one chapter, the book talks about the importance of looking at data in context. Based on the example in the book, I gave three groups of fifth graders the following made-up information: The first group was only told that a fire department's average response time was 5 minutes in April. The second group was told the response times for all 12 months. The third group was told the response time for other county's departments. They quickly realized that it was easier to interpret the data when they had more information. We then compared this to reading unfamiliar words in context--they loved the activity! And did you know the process of making statistical conclusions about the data is called drawing an inference? Fifth graders make inferential conclusions about their reading as well.

EVERYDATA is full of hundreds of interesting examples, everything from what caused the Challenger explosion to answering the question, "Do people who eat grilled cheese sandwiches really have better sex?" It explains the concepts of applied statistics in an easy to read manner that will leave you confident in your ability to discern between correlation and causation.

Last night at the party I confessed to John (one of the authors) that I began reading the book with low expectations, but ended up loving it. I mentioned that I thought my dad would love the book and that it would make a great Father's Day gift and John agreed. So, John, now I can officially say,

Just don't ask me about my sample size.