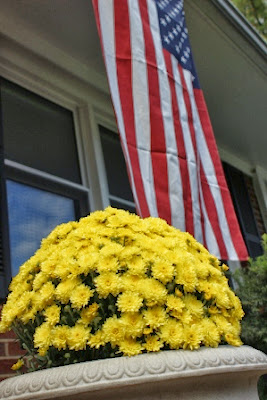 The American flag waves proudly in our neighborhood on so many occasions--Memorial Day, 4th of July, Veteran's Day...this year we added a new occasion to the list: Johnny Appleseed's birthday.
Johnny Appleseed (his real name was John "The Worm" Chapman) was an American Pioneer who spent 50 years travelling the Midwest.  He created apple orchards in Illinois, Indiana, Kentucky, Pennsylvania and Ohio.  Some of those trees still bear apples to this day.  (OK, you got me.  I made up "The Worm."  But everything else is true.  I think.) 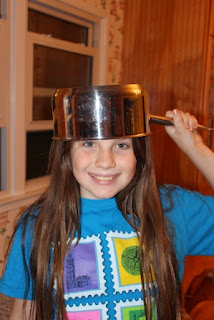 It is hard to know for sure because there are many stories about Johnny Appleseed in American Folklore.  Some say he wore a tin pot on his head and walked around barefoot.  In one story, a rattlesnake tries to bite Johnny's foot but he can't because the fangs can't puncture Johnny's thick skin.  Johnny was known as friendly and kind, even to animals.  In another tale, he is dancing with bears. 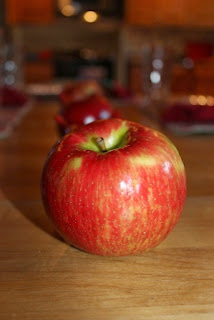 So, maybe some of the stories are exaggerated but Johnny still seems like a great guy and one worth celebrating.  That's where Katherine's expert party planning skills come into play.  For the table setting, she made apple napkin rings.  The centerpiece was, of course, a row of shiny red apples. 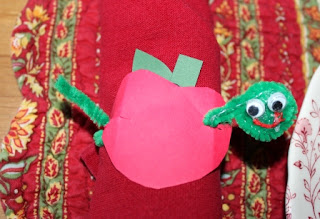 Then we invited some guests to the party.  Pop Pop and Uncle Stu were happy to participate.  We sang the Johnny Appleseed grace and dined on some "American" fare of oven-fried chicken, succotash, biscuits, and apple sauce.  And, of course, apple pie for dessert.  Uncle Stu even brought the ice cream. 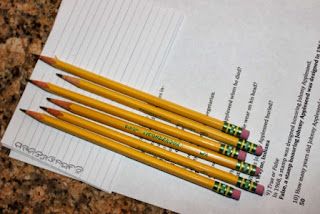 After dinner we tested our knowledge of John Chapman's life with a little trivia game.  Pop Pop declared himself the winner, but I suspect he might have had a little creative point totaling because I thought I was the Amazing Apple Trivia Queen.   Good food and fun times with family.  Thanks, Johnny Appleseed, for giving us an excuse to celebrate.
The Johnny Appleseed Grace
Oh, The Lord is good to me
And so I thank the Lord
For giving me
The things I need
The sun and the rain and the apple seed
The Lord is good to me.
﻿

Email ThisBlogThis!Share to TwitterShare to FacebookShare to Pinterest
Labels: home is where my heart is 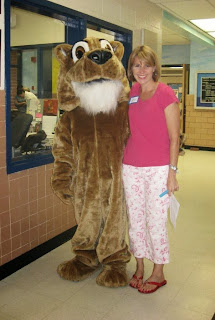 I am still hanging out with the Haycock Cougar... 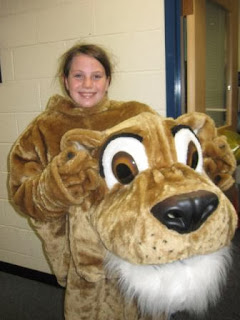 Surprise!  Katherine helped with orientation.  It gets pretty hot and sweaty in there...don't think she'll be applying to be a mascot again anytime soon.
In addition to starting school we also went on our 9th annual neighborhood camping trip.  This year's highlight was ziplining! 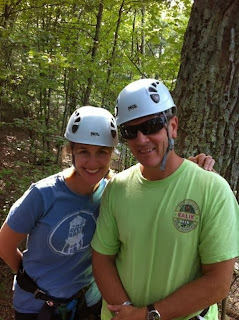 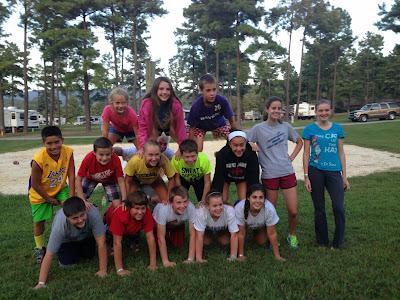 It was fun to get all the kids together for the weekend.
We are now in the full swing of fall.  Jack is playing football (already had his first--hopefully last--concussion) and Katherine is preparing for the first Girl Scout camping trip...yes, I am chaperoning again. Looking forward to more adventures of the season.
Happy Fall!
﻿

Posted by Allison at 6:17 AM No comments:

Email ThisBlogThis!Share to TwitterShare to FacebookShare to Pinterest
Labels: home is where my heart is, life of a teacher, my adventurous side
Newer Posts Older Posts Home
Subscribe to: Posts (Atom)